Is it normal for objects close to the camera to disappear in the seam/join?

I have been taking photos of small objects by placing them around the camera, and i've noticed that there's a spot along the seam/join where objects can vanish. I assume this is a feature of the stitching that happens between the two cameras, but is it normal for entire objects vanish into this joined area? Does it become less noticable with distant objects?

As far as I know because of parallax the closer something is to the lens and within or near the seam, there is a very likely chance the objects width will either be reduced ( sliced) or dissapear entirely.
The further the object is from the camera the less apparent the seams can become.
Of course, where possible try and place your objects either side of the seams. You should be able to do this if you are using live view in your Samsung device whilst shooting.
I actually take advantage of this effect to hide the tripod/selfie stick/camera stand so it gives the illusion that my camera is suspended in air.
Cheers
Tony

I read somewhere that anything closer than 80cm and on the join may be lost.

I also use it to good effect to hide a short selfie stick.

That's a good idea, I hadn't thought of doing that. Thanks very much for your feedback. 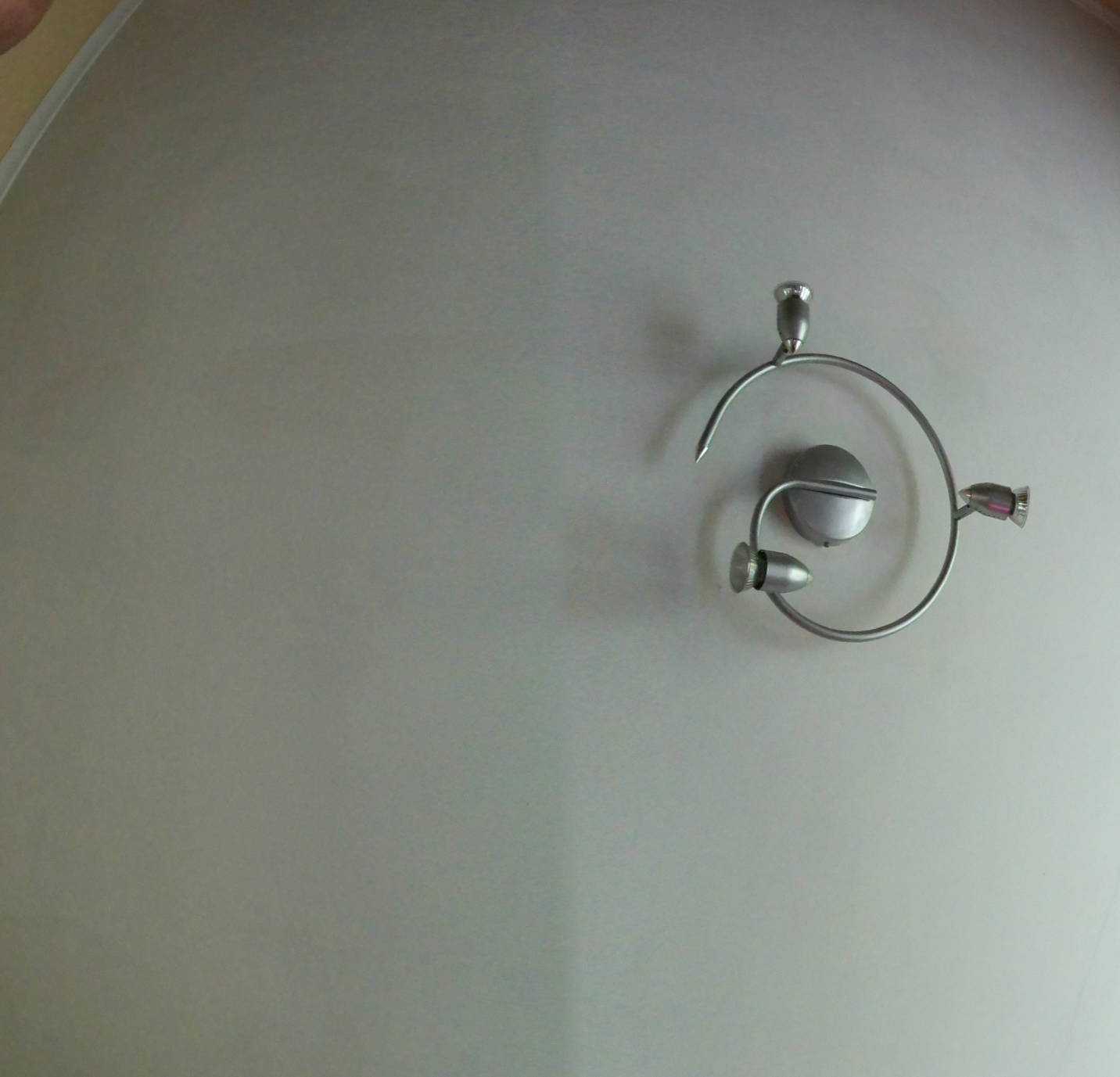 Not sure I would say its normal when on the web page Under the DUAL LENS sectionSamsung writes "The front and rear lenses each capture 180 degree horizontally and vertically, creating a seamless and complete 360-degree field of view."

The truth is its not seamless and as much as I would like to take Samsung to task over their clearly inaccurate product description I have to say for what the camera has to do to join those two images , it does in most cases a pretty good job.

I have had a lot of situations where the seam is obvious like the Picture Warewullf supplied in his post and its annoying. In some cases by rotating the camera 180 degrees to have the other half of the lens seam in that exact position has actually fixed it. You won't always fix it but try changing the position of the seam and you may just find that happy place. In some cases find an object that you can run the seam along. for example where two walls meet or a tree or edge of a building and run the seam with that object and it could be less apparent.

Now this is where the real experts will rip me apart because I don't know the facts and am only assuming ( we all know what happens when we assume) but I liken this to automatic gain control like what is built into almost every domestic home video camera where the cameras electronics tries to correct the exposure compensation to help us get better pictures. So I am thinking that each sensor or the capture process within the samsung 360 makes that subtle decision to try and fix what we have clearly missed. so when one lens is looking toward the bright part of the day versus the other lens looking toward a darker part , ( one looking toward the sun the other looking away ) the camera has to try and fix both and at some point it would be impossible to merge the two because they would be very different exposures. This is why I try different axis for the seam line.

I wish the camera had a manual override, something that slaves the settings completely to the lens you choose as the master , then I think that way you would have a better chance of a more seamless join.

In fact will start a thread asking opinions on this , we will see where that goes.

Hi Tony, the thing I'm struggling with it that I've got no experience with 260 photos beyond taking some with Google Streetview, so I don't know what's normal and what isn't, and how much I can reasonably expect this camera to do.

I have to admit, I'm still disappointed with the image quality. I was expecting them to be at least as good as the ones I'd taken with my S7 and Google Streetview, but so far they really aren't. For a dedicated camera to take photos that aren't as good a phone is not great. But then, that might just be my inexperience. At least I've learned how to edit the photos in Photoshop so I can go some way to tweaking them.

Hi Tony, the thing I'm struggling with it that I've got no experience with 260 photos beyond taking some with Google Streetview, so I don't know what's normal and what isn't, and how much I can reasonably expect this camera to do.

I have to admit, I'm still disappointed with the image quality. I was expecting them to be at least as good as the ones I'd taken with my S7 and Google Streetview, but so far they really aren't. For a dedicated camera to take photos that aren't as good a phone is not great. But then, that might just be my inexperience. At least I've learned how to edit the photos in Photoshop so I can go some way to tweaking them.

Warewullf, the foto's are better with the Gear 360 then taking them with any surround photo app on a phone. You just have to consider a few things;

1. Where is the light coming from and is it distributed evenly?

If the light falling on the lenses don't have the same intensity you can always line the camera so both lenses capture the same portion of the light. In the photo above you would have to turn the camera 90 degrees so the lenses are both perpendicular to the light sources.

If at all possible set the white balance manually. It will give a better result, it seems both lenses can have a different white balance when it is set on auto,

Ah, thanks for that. I'll give it a go. I contact Samsung support and after sending them a few images with the same issue (always indoors), they suggested that I take it in to one of their shops to be looked at.

Somehow I don't think this is a hardware issue. The problem with this new tech is that we have to experiment to have the best results and the pointers I gave is just a start. For us they give a (much) better result then just pointing the camera in the direction you want to be pointing at (this can be done later in software).

However, if you get a flawless camera back then let us know.

I've followed your advice and it does work to an extent. You can still see where it's stitched, but it's not as noticable in some cases. More experimenting to be done, however.

Make sure you're stitching photo's and videos on the phone. Also, when testing we, as humans, tend to go borderline and look up the extremes. So please test scenes where you know you want to take a photo of in the future.

It is also useful to remember the lighting when testing so it can serve as as a reference in the future. As an example, it's useless to test the camera in low light conditions indoor but adding light sources one at a time can give good results. If you can remember the amount of light (this is very difficult) it can be of use when you are shooting a scene in a dim lit restaurant.

Most stitching issues I've seen are purely down to differential lighting. For example the front lens facing the sun the other not. It improves massively if you have the join between both lenses facing the sun.

It's a bit trial and error but I'm getting better results this way.

Shooting indoors say in a church I don't see any stitching issues unless objects are too close but that's a different issue and solved with careful positioning.

Hi Ian, I've been putting the sun between the lenses as well and it definitely improves the quality.

Hi Warewulf.  That's a relatively common complaint in the Gear 360.  If you have PTGui or Autopano, you can use those to stitch and there won't be such a difference in color between the sides.  Otherwise, to minimize the color difference, I found it helpful to point the zenith toward the light source.

Hi Mic, in my experience stitching Gear 360 pictures with PTGui is a hit and miss. It's true that you have a lot of possibilities to correct for lighting issues and such but the templates floating around are not quit there yet unfortunately.

I'll check those out, thanks.

This is an interesting video that shows how Autopano can be used to manually stitch a Gear 360 dual lens image:

The Autopano version looks far better as it properly blends the different brightness and contrasts between dual images.

Nice video, thank you for that.

This is an interesting video that shows how Autopano can be used to manually stitch a Gear 360 dual lens image:

The Autopano version looks far better as it properly blends the different brightness and contrasts between dual images.

Hmm, Autopano does something strange. It deforms the photo in both the horizontal and vertical plane. But the video got me thinking about PTGui and I now have a 100% working template for that, I do have to straiten objects and set the horizon manually, but it stitches 100% without a seam.

Back to Samsung Gear 360 Forum

1 user(s) are reading this topic